Here’s another link that you can watch/listen to many different songs by The (original!) Glass Tables…HAHA

This is a song called “Isolation” performed and written by The Glass Tables.

Isolation, let me go
to the top or I’ll never know
what’s keeping me from you
and now I do

all I want is someone there for me

Isolation, let me go
I’ve made my choice
and now it’s time for me to
sleep in my own bed
don’t let it get into your head

all I want is someone there for me

The Glass Tables performing in Toronto….

We love Toronto, love it!

What do you do when you show up for a gig, and it’s been moved from a nice Bloor st venue to a tiny house party at dufferin/rogers road?

Well, obviously we play the gig and rock n’ roll like we do. There was standing room only, and several other bands…including Graph Rabbit (NY) and our friends Teach Me Equals (FLA) and some super friends who travelled from Sarnia who took these pics (stitched together as a GIF!)

Highlights from the gig include a basement that was about 4 feet high, super friends and many overflowing sinks.

TWWDFTC  (The Woman Who Danced for the Cosmonaut )

Sally and Tomas sat down and did an impromptu interview and they tell it like it is! 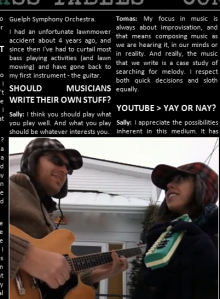 Here’s an excerpt from the interview:

We’re The Glass Tables. That has been our name since we started playing together. I don’t remember why, but it stuck and I really like it.

I suppose an inanimate object is just as worthy as any other to name a band after, and I think it’s actually quite a unique one at that.

We started playing as The Glass Tables in early spring 2011. We met 10 years ago while we were studying music at Wilfrid Laurier University. The Glass Tables moniker just made it official – we have shared artistic debates and events that have shaped my musical understanding since meeting.

Yes, the name made it official…but actually, we met before I was in university. I remember seeing Sally performing onstage – playing a harp! To me, Sally was a figure from the future – in terms of style and taste, she was figuratively a bright star in a dark sky, and I’ve always looked to her for inspiration and conspiration. We’ve known each other for over 10 years, but we only started playing together 2 years ago.

Last month (March 2013), the Glass Tables teamed up with Upstart Theatre to present The Seagull in Four Movements.

We wrote/performed live music and created the tape pieces for this modern adaptation of Chekov’s The Seagull. What an event it was! The Production ran at the Winchester Kitchen and Bar in Toronto ON, Canada March 14-23, 2013.

During her visit to Toronto, Renée (Stephanie Bitten) showcased her wild talent with her song, Prince to Come.

…and for the first time here with special collaborator, Stephanie Bitten on lead vocals, check out Prince to Come.

Thank you to the cast and crew of The Seagull!

Keep you eyes peeled for these amazing folks around the Toronto theatre scene.

On February 23, the Vancouver Island Music Awards announced their list of the 2013 nominees.

Lodge No.1 by the Glass Tables was nominated in the category of Island instrumental or Experimental album of the Year.

Our glass tables founders Sally Norris and Tomas Bouda joined forces with musicians, Larissa Mason (Ottawa ON) and Christopher Reiche (Victoria BC) to engage an intensive creative process captured by Lodge No.1

“We essentially went to the woods to create.  We wanted to be able to experience the beauty and calm of the forests” said Christopher Reiche.  The band was in the woods for just over a week while they wrote and recorded the pieces.

Their music is heavily based on improvisation and inhabits a space in between  jazz and free improv.  At the core of this album is the bands desire to experiment and try something new.

The album can be heard at

Viewed in live performance at

CDs can be purchased by contacting

Congratulations to all our nominated friends and colleagues on Vancouver Island. We can’t wait for the award show on April 28th!